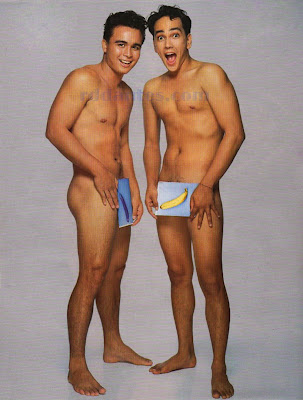 In the advent of the internet and cell phones and digital cameras, there were two cute guys in Seiko Films who churned out memorable flicks such as Talong, Kangkong, and Itlog. The double entendre was not subtle but the actors were coy by today’s standards yet bold and brazen at that time [the 90s]. I just realized I had this photo of the two guys who starred in many gay teens’ wet dreams – Leonardo Litton shows off his aubergine while Rodel Velayo his banana. Those were the days. Leonardo Litton is now based in the United States while Rodel Velayo has gone Down Under.