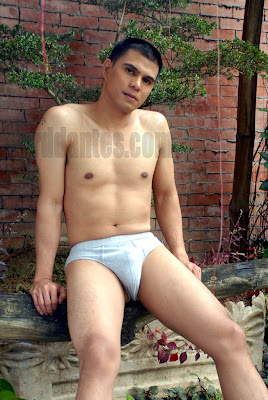 Juan Paolo Rivero was discovered by a talent agent while he was a front desk clerk at the Bataan Hilltop Hotel way back in 1999. Back then he was trying to make a living in the hotel although he graduated with a Medical Technology degree from the Far Eastern University in Manila. When Paolo Rivero entered showbiz, he was immediately cast as one of the male leads in the controversial movie Live Show. He did supporting roles thereater until he slipped away from the bright lights to work for a call center. Now, he’s doing gay-themed movies , e.g. Daybreak, M2M Versus and M2M4 EXXXXTREME . It looks like Paolo Rivero is here to stay for a while.

12 thoughts on “Paolo Rivero still at it!”