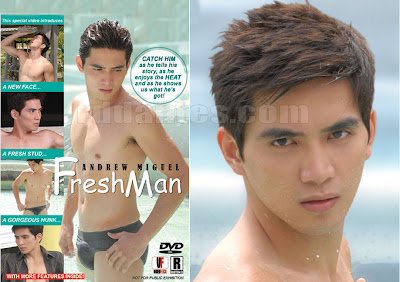 He’s “a new face, a fresh stud and a gorgeous hunk.” That’s how the video package describes newcomer Andrew Miguel in the new sexy flick Freshman. I’m not so sure about the story but the cover of the DVD [and VCD] says it all: Catch him as he tells his story, as he enjoys the HEAT and as he shows us what he’s got!” Well, the last time I heard, the Movie and Television Review and Classification Board [MTRCB], which is now entrusted with the task of reviewing and approving DVDs and other optical media, disapproved the movie from being released for commercial purposes. I guess we’ll have to wait for a while, as sooner or later, we’ll see Freshman on the shelves of SM stores.