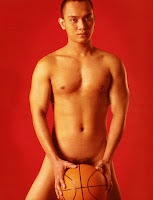 Jerwin Ellao is 21 years old and a native of Pasay City. He was a candidate of the Valentino Magazine Coverboy Search held recently. Said contest, which featured a no-briefs-allowed-onstage-but-wear-something-skimpy-and -tacky portion, attracted quite a number of dishy guys from the entertainment industry. It was such a huge hit, owing to the attractive contestants, the fast-paced production, and of course, the audacity of the boys.