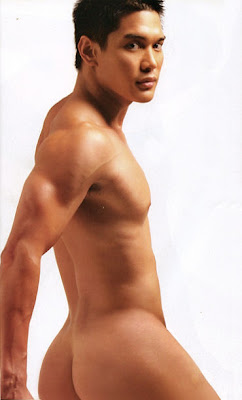 In 1998, GMA-7 finally decided to emulate ABS-CBN Channel 2’s formula [Star Circle] for discovering unknown lookers, sort of a low-cost talent pool, for its soaps and other programs. One of the better-looking male talents who made the cut was then 18-year old Adrian Louis Alandy, or Luis Alandy. Born on 7 February 1980 in Manila, Luis grew up in middle class Antipolo City, a hilly burb outside Manila. Luis’s stay in GMA-7 was uneventful [Although, I distinctly remember his first role was a shirtless rural boy bathing in a river while lead actor Ruffa Gutierrez – it was her eponymous drama series then – was leering from the rocks. Funny.] Luis finally decided to jump ship to rival ABS-CBN in 2000. Ironically, he was included in the Star Circle Batch 9 and from then on, he eventually got noticed. The 5’8″ tall actor landed his first major acting role in the hit series “Pangako sa ‘Yo“. The drama series offers didn’t stop since then: “Sana’y Wala Nang Wakas” (2003), “Vietnam Rose” (2005) and “Gulong ng Palad” (2005). He was also a member of the male revue Penis Talks and the sexy male group, Barako Boys. Luis has also passionately kissed a man [Polo Ravales] onscreen in the gay comedy flick, “Manay Po.” By the way, the actor finished a computer course at AMA-East Rizal campus and some units of Psychology at the San Sebastian College in Manila.

One thought on “Random Pick for the Day: Luis Alandy”