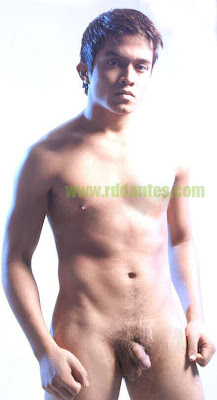 On an early morning drive to Manila a week ago, I saw a strikingly tall and appealing guy walking along South Super Highway, sweaty in his basketball barangay liga outfit.  I recognized him as Andro Morgan, who once appeared butt-naked in the video Masahe M2M. He’s been in lots of bikini contests [and won some] and lots of indie movies [and wowed some]. So he is already a veteran in the biz, we can safely say so.  Now, he is in a new movie called Quickie [check out the blurb:  Mabilis. Masarap. Masakit. Minadaling Pag-Ibig] from Sinehan Digitales and Queeriosity Video Project.  The movie, directed by Cris Pablo [Duda, Bilog , Bathhouse, Pitong Dalagita, Moreno] ,  will have a July 17 preem at the Cinemalaya 2008 and an August 9 Director’s Cut screening at the UP Film Center.

19 thoughts on “Andro Morgan does Quickie”