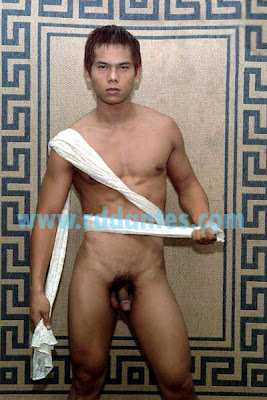 In the ongoing play at the Cultural Center of the Philippines, George Vail Kabristante’s Ang Kwento ng Menginga ng New York City na Kamukha ng Bee-Stung Lips ni Julia Roberts, Xeno Alejandro, who is cast in a major role – nudity included, reportedly got the attention of Bench owner Ben Chan when he [Xeno] wore Bench Body thongs on stage. Mr. Chan, who was in the theater at that time was so impressed with the male lead’s pecs and curves that he asked the producers to send him over to the underwear brand’s offices. The former member of Calendar Boys might just land a spot – express lane, sans the rigorous go-see – in Bench’s Blackout show this July at the Araneta Coliseum.

13 thoughts on “Xeno Alejandro does theater”