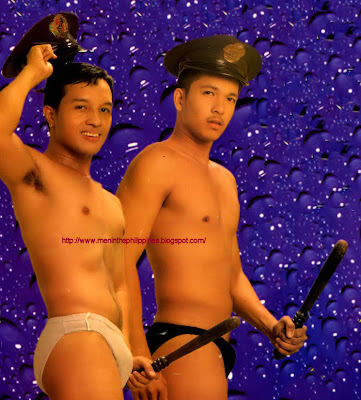 At a late dinner last night, UPH was his usual chatty self – aside from, of course, complaining about the food he ordered. The conversation turned towards a quite-famous friend of his, who, apparently, had a penchant for construction workers, truck drivers [and family drivers, too], and security guards. He was wondering how a [then] young man with prominent status and patrician looks would dip into the soiled skivvies of the working class. Frankly, I am wondering too about the sociology of it all: while most Filipino gay guys lust after the mestizoid class, there is quite a number out there who would rather pine for the dark, sweaty, muscled worker, more commonly termed in local gayspeak – endearingly or otherwise, as the -Er variety [waitEr, workEr, drivEr]. Maybe it’s the masculine archetype of those jobs, you know, the lonely construction worker driving a nail into wood, the oiled and greasy truck driver riding a big machine or the security guard who speaks softly but carries a big stick. Ah, such human nature.
Models are, from left, Fernando Antonio and Fernando Montenegro, erstwhile bare-naked actors in the 90s era of the R-films.