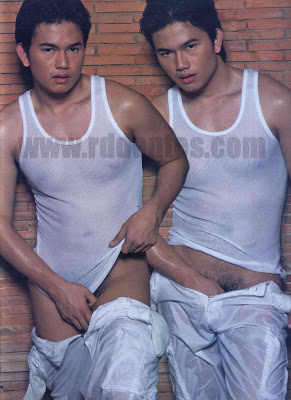 A few days ago there’s this post about a new movie with a dream cast consisting of the Johnron, Jude Marco and Harry Chua [in photo]. The movie, which will be independently produced by a flush-and-gilded friend of the three sexy boys, will be shot in Macau, Hong Kong and Manila. Yet, as with other movie projects, birth pains are showing. Although he is the top choice for one of the lead roles, Harry was asked to lose weight fast, as his girth now is three times that of his Parola days. Jude Marco and the Johnron, on the other hand, could not yet fix their respective vacation schedules. As top earners of the Macau establishment where they work, they were initially not allowed to file for leave of absence at the same time. And then again, there’s always a pleasant solution to every problem. Hopefully, these matters will be settled soon enough for the eventual shooting of the movie.