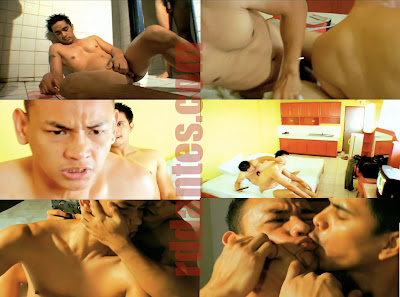 These are screenshots from the new movie Bayaw starring Paolo, Janvier and Andrew Miguel. The movie’s amusing catchphrase is “brothers-in-law become brothers outlaw.” Whatever that means, I’m guessing it literally conveys it’s a prison movie where the guys are nekkid in the showers and there’s a rape scene somewhere. Of course, this one’s a dramatic movie, which looks more like a tragedy, but one of the better highlights, if you ask me, would have to be the scene where Paolo does a frontal nudity scene [see topmost photo, right]. That is, if the MTRCB will not get in the way in this exhibition entry at the 2009 Cinemalaya Independent Film Festival and Competition, which will be held this July.