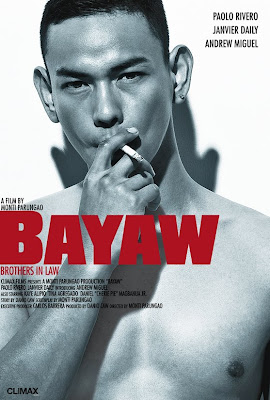 This is a cool poster from the new movie Bayaw, which is an entry at the Cinemalaya Independent Film Festival and Competition. If the poster’s concept looks familiar, it’s because the producer Climax Films Studio is the same publisher of the daring Climax magazines. The movie is entered in the NETPAC competition of Cinemalaya. NETPAC [Network for the Promotion of Asian Cinema] is an international non-profit organization composed of Asian critics, film educators, and festival organizers. The group gives out its award in select international film festivals to promote Asian cinema by choosing exceptional films and discovering new talents. Bayaw hopes to win the prestigious award. 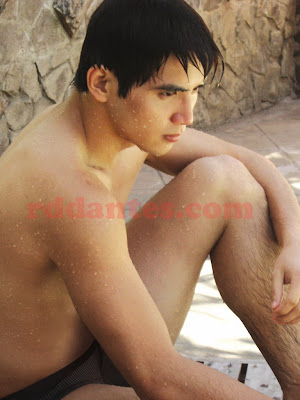 Comer Andrew Miguel is in the movie as a mysterious guy with an important role in the lives of the in-laws, portrayed by Paolo and Javier [who have interesting scenes of the frontal nudity variety]. According to the producer of the movie, the film “wanted to explore the complex relationship that can possibly develop between two in-laws forced into a difficult and dangerous situation. It is because of these extraordinary circumstances that a unique bond formed between the two in-laws—a bond bordering family ties, brotherhood, camaraderie and love.” Mark this date: 21 July 2009 [Tuesday] 9 p.m. at Venue 2 – Tanghalang Aurelio Tolentino [CCP Little Theater]. That’s the premiere night of Bayaw. See you there!