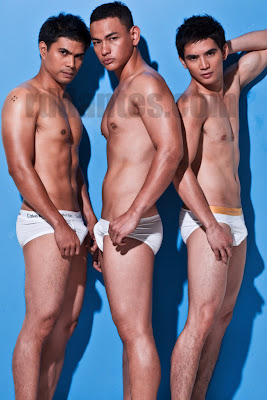 Huwag Bayaw is the title of a movie made 30 years ago which was a contender for the coveted Best Picture award at the 1979 FAMAS Awards.  Although the title is rather funny now considering the reference to a very malicious brother in-law, the movie was one of the more serious flicks at that time with a sensitive topic.  Next month, there’s another Bayaw movie that will be shown. It is a suspense-thriller with lots of scenes of the same-sex persuasion. Apparently, this is an exhibition film entered in the 2009 Cinemalaya Independent Film Festival and Competition at the MTRCB-free Cultural Center of the Philippines [CCP]. In photo are the lead actors Paolo Rivero, Janvier Daily and Andrew Miguel together.