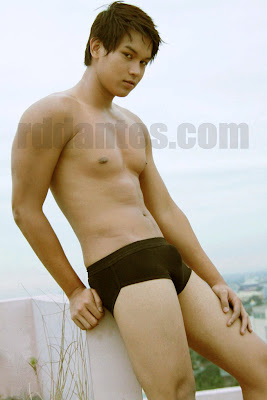 A little bit to the side to reveal some bunch and a bump. That’s of course, an image of the latest member of the Cappuccinos – that erotically-charged male group launched most recently. His name is Jolas Paguia and he’s tall! At 6’4″-tall, this 19-year-old showbiz hopeful [he is turning 20 on 24 April] is sure to tease and thrill in his new role as the fresh, fleshy and fleshly boy. If his stint at the teen edition of Big Brother did not give him the oomph in his showbiz career, Jolas is hoping that this time he’ll be more, uh, well-known.