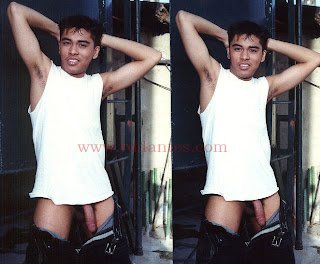 You did send me these photos of Batanes-born Jolo eight years ago, immediately after the photo shoot by – if I remember right, Sany C. You were even hyping this kid then as an Ivatan taking up Fine Arts  at the University of the East. And how you were excitedly casting him in a porn video for peanuts. Now, you remember me? So, you see, it is not possible – as you would skewedly like to believe, that UPH and I are one and the same person. UPH was just a wee bit of a teenager then, fantasizing about Anton, Harold and Rodel.  Stop threatening and harassing UPH just because he helped publicize – through his email – my new domain a couple of months back in the Yahoo groups. I know you hate this site to the lowest pits of hell, but spare UPH from all your fishwife venom.  Again, UPH and I are not one and the same person. Tell you what: I know someone whose recent tacky-bikini-and-gaudy-underwear fashion show bombed and whose talent got shown the door at Body Shots 2008. You wouldn’t like to be in that being’s position, would you? Because, as you would love to say over and over again against people you do not like, that is karma.  Way baaaaad!