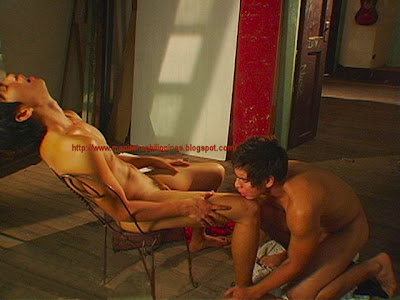 This is a still from the movie Ang Lalake sa Parola [The Man in the Lighthouse], and it looks like we’ll all get to see the lead actors’ members, after all. Aside from that, though, there’s a bittersweet love story. Here’s the synopsis of the movie: A homo-erotic journey in finding one’s true self Mateo (Harry Laurel) has been searching for his father (Richard Quan) who left when he was five. His search leads him to Lobo, Batangas only to discover that his father is in Dubai. Awaiting his father’s return, Mateo works as the caretaker of Lobo’s lighthouse. Here, he meets Jerome (Justin de Leon), a gay man from the city. What ensues soon after the meeting is the beginning of his homoerotic journey, while Suzet (Jennifer Lee), Mateo’s girlfriend struggles for his love and attention. What begins as a search for one’s father evolves into a search for one’s self. Will Mateo, in the midst of his conservative rural community, cross the thin line between being straight and being gay? This story is a search for oneself as seen through the lens of rural homosexuality, myths, and fairies (superstitions/belief?); and the lies that people create to escape the bitter realities of life. The movie will be shown on 3 September at the UP Film Institute at 7 p.m.