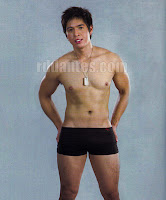 After his stint on primetime tv’s Ang Babaeng Hinugot Sa Aking Tadyang [lead: Dingdong], hot guy Justin de Leon, the guy made famous by the lighthouse movie, is in a new movie called Fidel with Jon Hall and Joao Mapa. Fidel is a Cinemalaya 2007 semi-finalist and it is only now that the commercial run’s scheduled. Directed by Mark Shandii Bacolod from the screenplay of Charlotte Dianco, Fidel’s plot summary is as follows: “Fidel is a Filipino worker who is on death row in the Middle East for killing his employer. Because of a woman reporter who is bent on doing a full story about him, government officials are now trying to help him. Fidel insists that he killed his employer on purpose. The reporter learns about his past- a boy-next-door type of person who grew up with a loving family. His profile doesn’t fit the picture of a killer. Sister Lourdes, the Filipino nun who visits Fidel regularly wants to know the truth too. But can she handle the truth? “

14 thoughts on “Justin does Fidel”