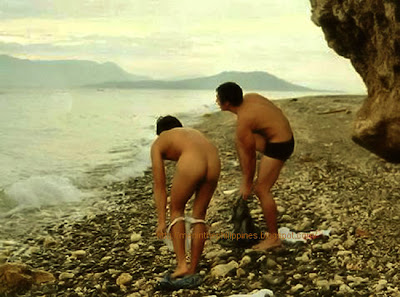 Despite the “B” rating from the Film Development Council’s Cinema Evaluation Board [which entitled the film to 65-percent rebate on its amusement taxes], “Ang Lalake sa Parola” was a commercial success at the exclusive IndieSine of the Robinsons Galleria Mall. The digital film, starring Harry Chua [Laurel] and Justin de Leon [seen in photo above in the skinny-dipping scene of the movie], also got mixed reviews from film critics, after surpassing the initial “X” rating from the MTRCB. The DVD version of the movie will be out soon, and, with fingers crossed, it will be in its uncut version.