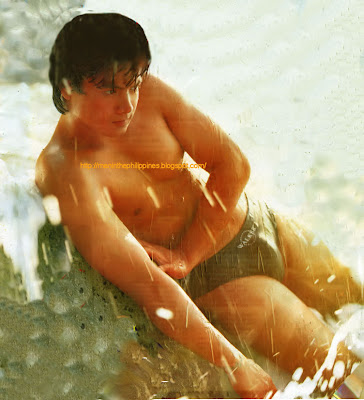 Today, Manila was hit by torrential rains, which flooded large sections of the metro. Since I couldn’t get out of the house as it was getting nasty outside, I just worked from home today, with the occasional naps, YM chats, and internet browsing. I discovered mybagyo.com, which tracks in real time the Super Typhoon Sepat [or Egay in the Philippines]. It is expected to land Thursday, tomorrow.

By the way, that’s Leandro Baldemor up there. I thought I could put him there, with all the water around him as an appropriate illustration for this post. The former Seiko boldie was in the premiere two nights ago of GMA 7’s version of the Mexican soap Marimar, for a good 2 minutes only. He was shirtless as the contracted paramour of Marimar’s mother. Obviously he’s gained some poundage, but the moreno actor of Seiko Films’ sexy movies of yore still retained his boyish looks. If only the bubble butt actor can get more projects again.