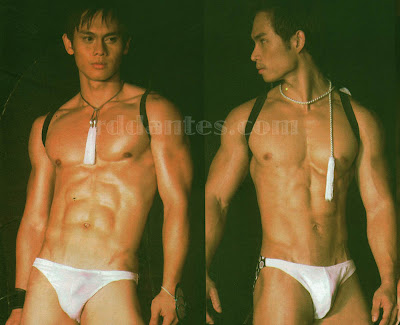 It’s a tad difficult to choose between hunks Andrei Allen a.k.a. Arvin Macu [left] and James Banzon. Both are ripped and buff, with strong and fit bodies to boot. Both were winners in the major bikini contests – Andrei Allen romped off with the main prize in Sta. Lucia East Grand Mall’s Mr. Sexy Body 2008 contest, while James Banzon snagged the title in Slimmers World’s Great Bodies 2007. In one occasion where the two hunks finally met in a contest – the Bikini Frenzy [sponsored by Golden Sunset Resort] in Calatagan, Batangas, everyone expected a clash of the titans for the title. They both lost to a younger and leaner boy who goes by the name of Adrian Asor.