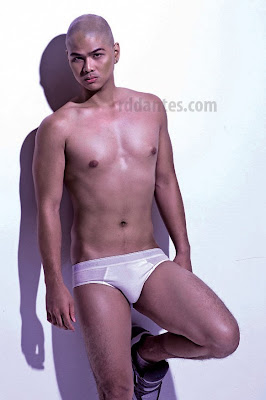 That’s Ralph Darrel Mateo, and he has been in and around last season’s bikini contests and the independently-produced queer flicks like Heavenly Touch [he played one of the masseurs]. This Ginoong Metro Manila 2009 titleholder is again part of a daring movie featuring nekkid boys on a lonely island. Climax Films’ Santuaryo is set to be shown in March and Ralph Mateo is part of an all-boys cast cavorting threadbare on the beach.