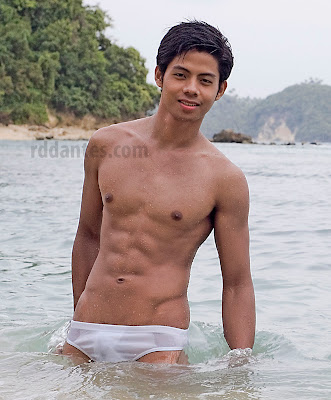 Sunday morning, yellow sky. The sun is floating, diamond high. I’m just on LSS mode from October Project’s Sunday Morning Yellow Sky song, and I’m in a state of do-nothingness on the verge of drowsiness, actually. Let’s see … Last night’s Jake Cuenca show at the Mall of Asia was a bringdown because Jake wore jeans throughout the show – never showing his butt and other parts where the sun doesn’t necessarily shine. Earlier this morning, I did that ABS-CBN-sponsored run along Roxas Boulevard in Manila and Jake was running and walking in his 5-km race. Piolo was faster, running 10 kms. in true running form. Hot and sweaty, he had nice round buttocks! I’m rambling because I can’t think now of any entry, too tired and torpid. And here’s AJ Ona – wet briefs and all – again, promoting the indie flick Santuaryo, which will have its commercial run starting 17 March 2010 in selected theaters.