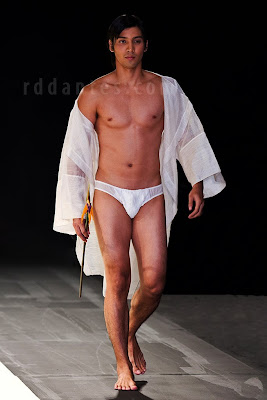 In the early 200os, the rage among male models was the chicken-chested, under-nourished, sexually-ambiguous figure. Now, that image of a starving model is gone, and fashion houses abroad are now going toward men with some muscles and a physique. I’m writing this because I don’t really know where to put Robert Declaro. He has some muscles and a physique but he looks a bit chunky for a model. This 5’11’-tall cutie from San Pablo City used to have a better and more defined physique, circa Body Shots 2008.