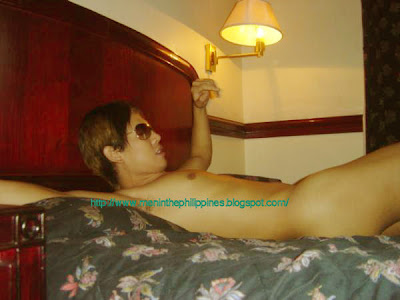 I meant, as a commercial model. Or an actor. Iffy Harold Montano, who figured recently in a sex-bust on tv [see related post], is determined to make it and how. Uncomfortable wearing clothes, Harold Montano is doing what he loves best [i.e. stripping, i suppose] to make himself known. He goes around with a resume that could have worked wonders for him in the mid-level corporate world: a degree in Business Management from La Consolacion College in Bacolod City and a “rich-clan breeeding.” Apparently he also owns a bar called Ang Kab Grill, with capital from “my rich aunt.” It was in that bar where he was discovered by movie writers, dancing with a slithery snake to cover his member. From then on he has appeared in countless shows, as the main attraction with his, uh, snake. His publicists have touted him as the next Zuma, the famous boa-garbed [I meant big snakes on the neck] Filipino comic-book character being developed by GMA 7 as a new series. So far, the tv network has not yet announced plans for such series.

One thought on “How to sell one’s self…”