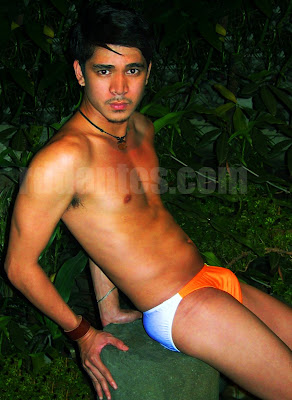 Twenty-one-year-old Jerby dela Cruz is a native of Roxas City but he is now based in Quezon City although he is the current Lakan ng San Jose City [in Bulacan] and the Lakan ng Bulacan 2008 winner. The tall former student of Hercor College in Roxas City was also a featured model in the recently-held Philippine Fashion Week. He has joined bikini contests in Metro Manila after his stint in Bulacan. With a little scrub and scour, he’ll be polished to movie star looks. He reminds me of a younger Piolo Jose Pascual [pre-surgery and pre-stardom].

34 thoughts on “Jerby So Comely”