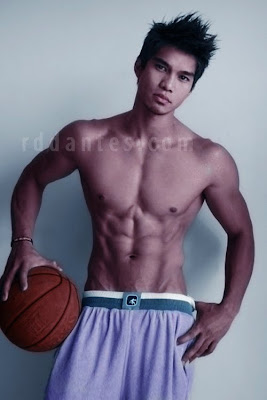 Look at the abs! The model with the body to-die-for is Joanel Lara a.k.a. CJ Lara. He used to be one of the go-go boys in the gay parties of Circuit Asia, together with his equally-hot brother Gerald Ford “G-Ford” Lara. His other brother with the rock-hard abs was also named after a U.S. prez, Lyndon [no pic here, though]. Joanel was seen in the the first few editions of the Bench underwear shows. He also appeared in TVCs and print ads.