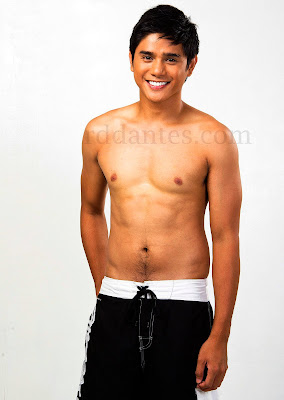 That’s High Definition for you. Lem Pelayo is starring alongside the Brazilian models Aki, Fabinho and Daniel in the new movie D’Survivors by Adolfo Alix, Jr. The PR: “D’Survivors” is, as the title suggests, a take on the popular reality show of adventurous, young people put in man-made survival and matter-of-life-and-death situations and challenges to test one’s mettle, physical strength, human disposition and character. Interestingly, the present movie was shot in the very same islands where the “Survivor” of other franchise countries are shot- in the pristine Caramoan Islands, CamSur. On their way to Babuyan Island for a pictorial, a group of models finally finds themselves stranded in an unknown island. Chaos reigns as they try to survive there along with the other survivors. The current spoof boasts of a breath-taking locale, a paradise island of blue waters, white sands and lush green vegetations; and a handful of beautiful people, mostly supermodels, and talented comedians, who all let their hair down, so-to-speak, and came up with a real-funny rib tickler. Showing this April 2010.