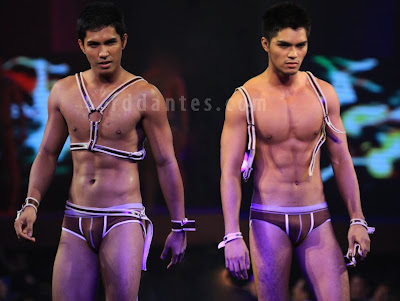 The theme for today is unique names and brown underwear. The one on the left is Dart Kamboozia, ex-Body Shots 2008 contestant and now Masculados Dos member. The 22-year-old and 6’1″-tall hunk also appeared as one of the Cosmopolitan [Phils] magazine’s hot bachelors for 2009. The other guy on the right is Laxzy Rem Villar, who now lists himself as Laxie Villar. He was one of the contestants in last summer’s Century Tuna Superbods. The 22-year-old and 6’1″-tall cutie was also a Cosmo bachelor and a Bench underwear show model.