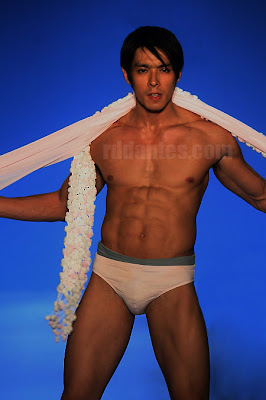 The guy with the real rock-hard abs is Rey Talosig, Jr., a 28 year-old model-in-demand and former member of GMA-7’s noontime show hunks group – Take 5 [with cutie Carlos Concepcion and boldie Douglas Robinson]. He was the second-runner-up in the recently-held Century Tuna Superbods, too. This Broadcasting graduate from the University of the Philippines [Diliman] was not included in this year’s Cosmopolitan [Phils] magazine’s list of hot bachelors because he is already married with a kid.