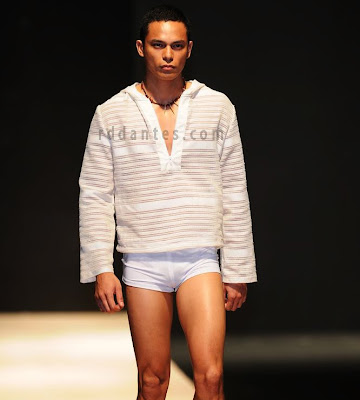 So I’m a sucker for reality tv and I’m into this Philippine version of the Big Brother show, where everyone is self-conscious and nice, and it’s too painful to watch because the “housemates” are all on tenterhooks, on pins and needles, so to speak, [but I still watch anyways] and here comes late-entrant Rocky Salumbides, the male model who made it big in Singapore for two fashion weeks and that was it, who does a short, short [no pun, really] stay in the house and suddenly decides to go out because he couldn’t stand to be separated from his woman, this hot mama-actor who’s apparently having serious and serial cougar moments the past couple of years after separating from her husband in Australia, who’s… no, that’s another story you’ll have to pry from me, because now, I’m talking about Rocky and how stupid, screwy and silly he is and his actions, knowing that a lot of people would’ve killed to be inside the Big Brother house and he is just leaving everything behind – all for a pretty woman, who I’m guessing must be so in love with Rocky in a very romantic, not lusty, way because apparently there isn’t much to shuck and sling in the Big Penis department. There.