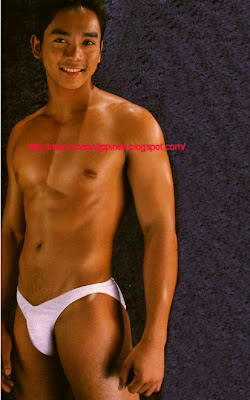 Reputedly the biggest among the Men of Provoq, Johnron is from Quezon province. He was studying to be a seaman at the Technological Institute of the Philippines [TIP] when he decided to join “personality” contests. His claim to bikinidom fame is winning the Mr. Globe Philippines 2005, where he was discovered. His stint as a member of the flaunt-to-taunt group, Men of Provoq, has paved the way for his popularity among the gay pop. A bare-skinned Johnron will next be seen in the upcoming show of the Men of Provoq, entitled Cruise.

, a Provocative Tour is a gay party highlighted by a series of sexually charged production numbers from the Men of Provoq. The party is on August 10, 2007 at the NBC Tent. Show Starts at 9pm. VIP tickets entitle one to a free drink and entrance to a specially designated area right by the stage for the best view of the show. VIP ticket holders can also drink and interact with the Provoq Men right after the show. VIP tickets are at Php1500 and are not commercially available. You may email lexbonife@yahoo.com your contact numbers if you want reservation for the VIP tickets.

5 thoughts on “The Men of Provoq are back! [Johnron Tañada]”