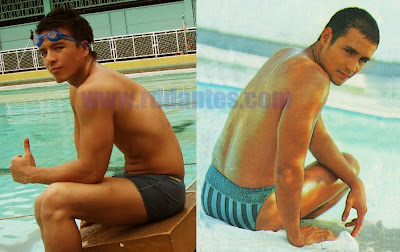 … award-winning actor and hunky actor Emilio Garcia [in photo, right]. A few years ago, Emilio Garcia was one of the go-to guys for movies with sexy themes.  His photos in speedos and tighty whities were splashed all over showbiz magazines at that time.  And then again, Emilio Garcia added some years and still looks hot these days.  Now he has serious acting awards to boot, i.e.  Best Supporting Actor in Gawad Tanglaw  for his performance in Walang Kawala; Best Actor in Thessaloniki International Film Festival in Greece; and, Best Supporting Actor in Gawad Urian, Gawad Tanglaw and Star Awards last year for the movie Selda. Marco Morales [in photo, left] hopes to get acting awards someday, too. Just like his co-star Emilio Garcia in Booking,  with a premiere night on 23 February 2009 at the UP Film Institute.

24 thoughts on “Marco Morales looks up to….”