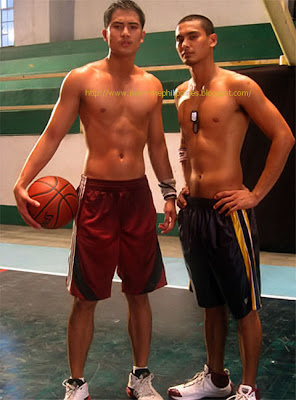 San Sebastian College Recoletos [SSCR-R] must be the Handsome Boy Modeling School in the country. A raid on their basketball varsity teams, the Stags of the Manila campus and Baycats of Cavite City campus, would yield the tall, trim and tempting guys. Let’s see, there’s JC Tiuseco, and Ram Sagad [the taller guy in the photo above], who both won the top spots in the Century Tuna Superbods last summer. And then there’s 24-year-old model Marx Pangan Topacio [the shorter guy in the photo], who used to play for the SSC-R Baycats. The 6’1″-tall hunk from Kawit, Cavite finished BSBA Management from SSC-R de Cavite. He has done TVCs [e.g. Greenwich], print ads and runway shows, too.