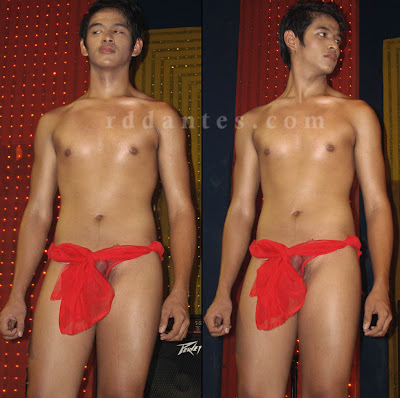 A few years ago, a racy show called Heavenly Bodies 4 was held at the Metrobar featuring more than 30 models, including one guy from Cavite who registered his name as Michael Estenso. He donned the peering-penis costume [in photo]. In last year’s edition of the Circle of 10 Image Model Search, one guy who looks like the one above, was one of the semifinalists, using the name Vince Estenso. Earlier this year, in GMA-7’s Take Me Out, one Michael Estenzo appeared as one of the contestants on the show. The same guy is now a hopeful in TV-5’s reality search Star Factor, using the name Miguel Vincent Estenzo. So there.