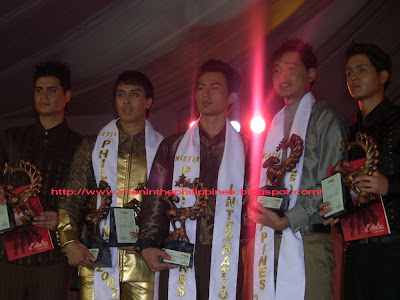 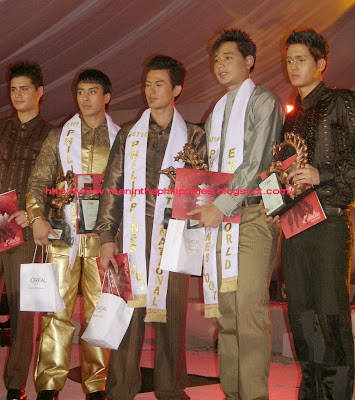 Amidst the understandable birth pains [low turnout of audience, minor sponsors, bad production] of staging the first ever Mister Philippines pageant, the male contest just declared this evening the upstanding winners. Ian Leonel Porlayagan was the main winner, who will represent the country in Mexico City for the Mister International pageant. Cute chinito Michael Raymond Lim, way past his Provoq Men days, is the Philippines’ rep in the Mister Expoworld contest in Guatemala City, while Nino Sazon from Canada will go to Jakarta, Indonesia for the Mister International Man pageant. The runners-up were the dashing guys from Germany.

Ian Leonel Porlayagan who spoke Filipino throughout the contest’s interview and Q&A, declared that he is a farmer using manual labor and heavy equipment down in the plains of Nueva Ecija. What he failed to mention though was his penchant for joining bikini contests in Manila [the last being 2nd RU to Andro Morgan in Bar Uno’s Mr. Aura 2006] and a thank-you guy in Mr. World-Philippines. Fortunately this time, his new farmer-boy PR strategy and booming voice [think barrio politician in a speech] paid off.

I’ve always liked Michael Raymond Lim, not because of his cocky and ballsy photos with Provoq, but he is just so charming. He is now into commercials and modeling with clothes on, with Posh Models Modeling Agency.

Nino Sazon, the beat-boxing Mr. Talent from Canada, was the shortest [is he the oldest too?] but he still managed to land in the top three. If you ask me, he is another John Lopez clone, that is, contrived and conscripted.

The two Fil-German boys, who were young, tall and dreamy, only managed to grab the runner-up positions. Probably the judges felt that natural-born Filipinos should go to the international competitions. That is so unfair, though.

Completing the finalists were Jose Gerardo Roa from Cagayan de Oro City, who was surprisingly eloquent, and Joaquin Casado [see previous post], who was more like making an appeal to the judges instead of having fun [“I joined this contest because I want to help my family, even if I’m having a hard time”]. Too bad, Ginoong Pilipinas winner Dennis Barrion aka Denver Olivarez did not even make it to the top seven finalists.

Bikini photos – blurry, hazy and red- will be uploaded soon.