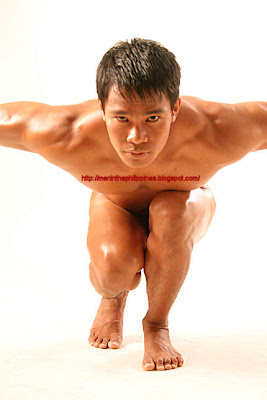 Model: Bronzed and Brazen Eric Santiago
On Friday the 13th night, I was already getting my zzz’s, too beat from a whole day’s work, when my phone rang. On the other end of the line was R., a good friend on vacation from the US, who excitedly said he’s going to pick me up in a few minutes as we are going to Palawan – that bar in Cubao, Quezon City, which I have been too curious of late to see and try out since I have been hearing some buzz about the place. Despite the brain fag, which I doused with a cold shower, I tagged along.

Turns out, Palawan is composed of three bars in Cubao: two [Palawan 2 and 3] in Yale Street near the corner of Aurora Boulevard, and the other one [Palawan 1] a few blocks down towards EDSA. We went first to Palawan 2, a sing-along bar with cross-dressing hosts armed with lots of self-deprecating humor and off-color jokes. Since the place was not that packed, we moved across to Palawan 3, which reminded me of the old Chaparral in Baguio City – dank and dark, probably a former hetero go-go club with greasy pot-bellied pulis. This time, the place was turned into a gay, gay place with a drag show. The thing is: when you go inside the place, check your persnickety, fussy self at the door, and just try to enjoy the place.

The show was not that bad. One funny gay guy, who reminded me of gay Filipino actor Alec Mapa [Connie and Carla], did a mean full extended version of the Do-Re-Mi Song from the Sound of Music and the live concert version of Shirley Bassey’s Nobody Does It Like Me. One lipsynched a mid-tempo ballad of I Will Survive I think it was a Gladys Knight. Of course, there was a smattering of J-Lo, Christina, Regine, Leah Navarro, Madonna, and was that a Lourna Pal? It was fun, funny and entertaining, the entrance fee of 120 pesos was definitely well-spent, if you ask me.

Now to the crowd part. The place was packed on a Friday night, I was amused. I was telling my friend I should have worn tsinelas instead of my new trainers as there were some gutterpup-types in there. There were a few good-looking ones I presume, but I was all too consumed by the cheap beer. They don’t serve San Miguel but only Lone Star and some other local beers. Let’s just say your 500 pesos can get you drunk till Wednesday. And I’m evading the subject about the crowd.

We dropped by Palawan 1, a few blocks near EDSA, to see the place before calling it a night. The bar, which reeked of stale beer, urine and molds, was surprisingly teeming with people at 5 am, and they were also out in the gutter, I mean, the street. The morning light was breaking, and I started to feel funny, so we headed home.