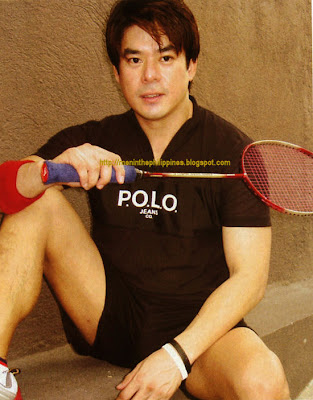 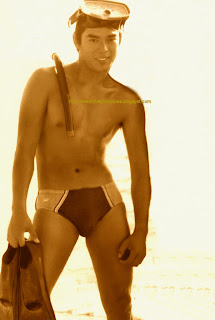 Patrick dela Rosa, 1983.
When I was young [and too young to understand], my ultimate lust object was a captivating chinito who always appeared in his publicity photos in tight speedos. Twenty four years ago, a handsome cheerleader of the San Sebastian College was discovered by a talent scout, who asked a young Patrick dela Rosa to do a VTR for a CloseUp toothpaste tv commercial. Patrick reluctantly went to the VTR and he was immediately cast as the lead in the toothpaste TVC. Regal Films eventually signed up the toothy chinito cheerleader in a series of sexy movies. His first movie was in the 1983 hit flick, Shame, with doomed beauty Claudia Zobel. Back then, a butt exposure was big deal and Patrick had no qualms in his sex scenes. Next he did Climax [1985] and White Slavery [1985], movies with gratuitous sex scenes. Patrick took a respite from sex flicks after the car-accident death of his leading lady in Shame. He resurfaced in 1990, as the villain in action B-movies. He was, in fact, good at villain roles that producers always got his services as the proverbial bad guy with the big gun. Last year, the still-single actor was cast in a popular soap on ABS-CBN, this time as the good guy. The 40-year old actor’s career has since been resurrected on tv – with various guest appearances in soaps and sitcoms.