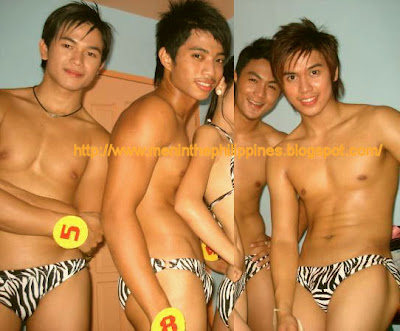 A lot of readers have been emailing me lately requesting [or better yet, insisting] on more features of Provoq discovery Harry Laurel, aka Harry Chua. Reader harrychuachika, however, was gracious enough to send me the photo above [with the woman cropped], with a pre-Provoq Harry joining some small bikini contest a year ago. No details were given though, if the cute chinito won. Just the same, Harry’s debut flick, Ang Lalake sa Parola will be shown on September 3 at the UP Film Institute, where – as Screenplay writer Lex Bonife would promote – you will see the family jewels of the lead actors. Tickets will be sold at the site, at Php 100. For more information about the movie, you may pester and badger Lex at lexbonife@yahoo.com.