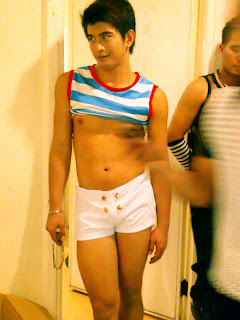 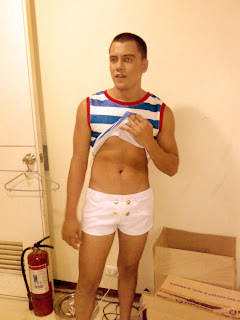 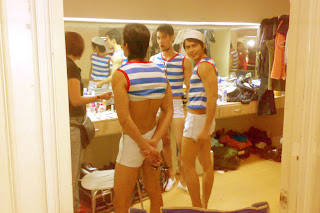 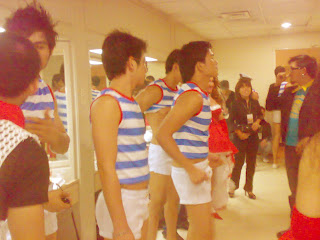 1. Thanks to regular reader Barbarella for sending the photos to my email. These are photos backstage before the opening number where the boys are in sailor stripes and hot pants [which had velcro on the sides, as the boys peeled them away to reveal their barely-there thongs at the end of the number].
2. Niko Arellano, the most hospitable Provoq guy, boldly fastened himself in the monkey bars – upside down and in a G string – during the most applauded number. Later, in between sets, he would take frantic puffs of cigarettes backstage to “relieve the stress.”
3. Justin nearly bared all onstage when his fundoshi was carefully taken off during their Japanese Yakuza production. Many were expecting he’ll pull off a stunt, until the lights dimmed and a collective grunt was heard from the audience.

4. Harry finished school in Bicol province as a Marine Merchant, or so I heard when I asked him about school. Charming and soft-spoken, clearly, he is the new star of the group. [And he’s moved to Makati, somewhere in a relatively new condo in a busy part of the city.]

5. Chunky Maico or Ivan was more popular with the girls [yes, there were girls in the audience]. He was seen backstage, mobbed by the girls for photos.

6. The boys are set to go on tour in Singapore and Sydney, as revealed by Lex Bonife.

7. The video of the event will be released anytime soon. For those living abroad, regularly check out www.kabayancentral.com or www.myayala.com.