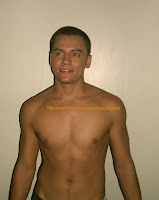 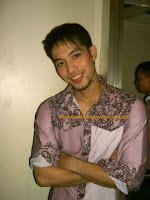 l-r: Chester Nolledo, Niko Arellano,Josh Ivan Morales
1. Johnron Tanada revealed after the show that his direct-to-video flick entitled Hubad: Striptease Sessions for Daring Men, produced by his mother studio Viva, will be released in September this year. It will be his most audacious project for his legions of happy fans. Details and photos will be posted here soon.

2. Harry Chua’s Ang Lalaki sa Parola [The Man in the Lighthouse] is all set for limited theatrical release, and not as a direct-to-video movie anymore. Viva is working on the details for the release date so watch out for this debut of Provoq’s new star.

3. Harry disclosed to me that he has moved from Sampaloc, Manila to a Makati City condo, where one of my siblings also lives.

4. It was Justin de Leon’s birthday that night, making him the oldest in his batch at 29 years.

5. The most applauded number was the pole dance sequence of Niko, Chester and Harry.

6. There were no “predatory” old men at the show. The people seated at the couches were decent guys, gracious enough to offer us remaining spaces in their seats and bottles of the free drinks. There were, however, pompous little queers who think they are above the rest because of their age and Greenhills garb.

7. Spotted among the audience were GMA Starstruck eliminee and model Randolf Stamatelaky and Mossimo Bikini finalist Rafael Gonzales with his duded out boyfriend. They were also seen backstage, after the show, hobnobbing with the boys.

8. After the show, the boys gamely posed for photos with some of the audience, backstage. Niko Arellano was the most playful, Maico Eduria was tired and grumpy, Chester, Gabriel and John Miller were bashful, and Justin, Harry and Johnron were very accommodating.

9. The new magazine of Provoq was also launched that night. It costs Php 340.00. Go buy the photozine as I will not be scanning and posting the revealing pictures here guys. For those abroad, you may email Lex Bonife at lexbonife@yahoo.com on how to place orders for the new video and the magazine.