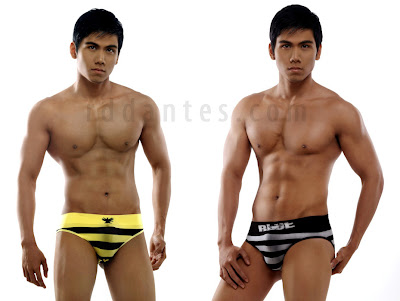 Model-of-the-moment Raph Almeda wouldn’t do that! Someone’s using Raph’s name to extort money from unsuspecting [read: dupable] persons. The modus is old and has been used several times already, and yet some still fall into it. Rule No. 14 is – Do not just deposit money into some stranger’s bank account, on a mere hint of lust. Here’s an email I got recently from chinopacia@yahoo.com, quoted in full –
I tried to call the number of Ralph Almeda posted in the comments section of your blog, and someone answered, supposed to be Ralph Almeda. We agreed to meet, and he asked me to deposit the amount of nine thousand pesos first to the account of a certain Benjamin Yap Jr, at the Metrobank, account number 3094268932, which I did in December 15, 2009. We agreed to meet that same evening after he got my money. Before the time of the meeting he texted me that the sister of his girlfriend was at the hospital and he could not leave her alone, and we should reset our meeting the following night on December 16. In the morning of December 16, he was again trying to sweet talk me to deposit another four thousand pesos on the same account because he said he needs it badly for his car, which I refused because in the first place he has not done his part of the deal. Again I asked him for the meeting, he said it would be at 11pm of December 16. When I called his that evening, his phone was shut down. Please warn people that this Ralph Almeda telephone is a scam. They should not fall prey to it. I have the bank receipts to prove that I made the deposit, and that Ralph never showed up.
Now, after reading the mail, you can judge chinopacia@yahoo.com. Let’s all wham, bam alakazam his noggin’ and put some sense of reason and a smattering of wisdom and discretion into his consciousness. Hell yeah!