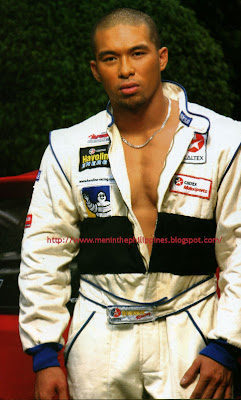 Twenty-seven year old Renan Ponce Morales is a full-time race car driver of the Fujitsu-Ten Toyota Team TOM’S at the Asian Formula Three Series. His racing history include the 2004 Philippine Junior Touring Car Championship [2nd overall] and the 2003 Philippine Junior Touring Car Championship [he was just starting then]. Renan was also part of the Philippine team that got sent to the 2005 Marlboro Red Racing School in Varano, Italy. On a personal note, he readily admits that he got into circuit racing to overcome his drug and alcohol addiction. And he proudly proclaims that he has gone commando [not worn underwear] since he was 11 years old. Exhibit 1 – photo above.