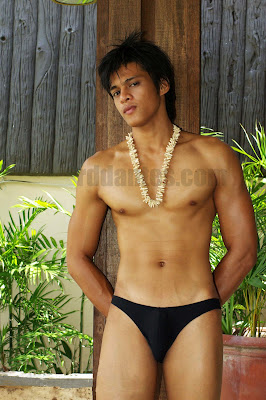 Last year was the winningest one for aspiring actor Ryan Dungo in bikinidom come. He snagged the title in summer’s biggest contest – Hataw Super Bodies 2008 after a second runner-up finish in Heatwave 2008. And then he joined showbiz by stripping all the way in the controversial flick Sagwan, comprised mainly by the members of the sexy-boy group the Cappuccinos.  Ryan is the younger brother of Randolph, who’s equally daring and provocative in his movies Binyag and Lalamunan.