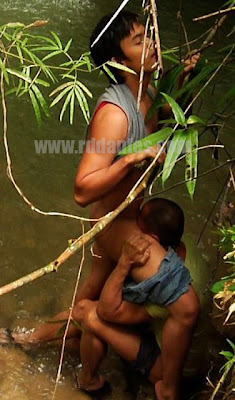 The image above is a still from the movie Sagwan, starring most members of the new sexy boy-group Cappuccinos. Now I’m just wondering how the hell the two guys above managed to make the scene so real. I mean, one’s face is on the other’s crotch – and surely, no serious play-acting or deft physical maneuver can hide the fact that that guy down there was obviously exploring the other one’s nether regions. Anyways, the movie got an X rating on its first review from the MTRCB, which means that “it is not suitable for pubic exhibition.” Yet, there is still hope because there’s the mandatory second review coming up plus the appeal to the Office of the President in case things go awry. And, just the same, the premiere night at the UP Film Institute, which is beyond MTRCB’s jurisdiction, will still push through on 4 February 2009!