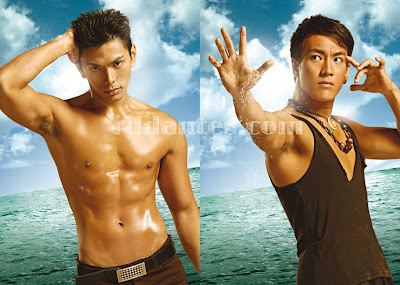 So, how did you find the new season of Survivor Philippines in Palau? How were the guys? Say for example, there’s 24-year-old professional model Vlad Nesas [left photo] who is so 2002 with his “The Metrosexual” tag. In the press kit, he also describes himself as an “alpha male” contrary to what he showed in the initial telecast. He was meek and docile in tight jeans and constantly flexing muscles. And then there’s 27-year-old Troy Perez, who proclaims himself as “The Mentalist” whatever that meant. He looks different, too, on tv as compared to the photo above. Maybe he was playing tricks. Magic, most probably.

28 thoughts on “Survivors Vlad and Troy”