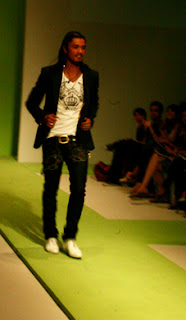 At the recent gala night of the Philippine Fashion Week 2007, one of the designers in the program was billed as Derick Hibaler. I thought it was a namesake of that ripped male model from Pangasinan who lead a colorful life. When the time came for the designer to come out, it was really Derick the model. His collection of denims, mostly the slim-fit-and-skinny jeans type [reminds me of Chip & Pepper’s 5-pocket skinny jeans], was lauded by the media and fashion watchers. It seems like this guy is now going places, I mean, switching trades, or whatever you call his career shift. Wise move.

Sorry for the grainy shot of the pic above. That was taken 14 years ago, during the Ginoong Pilipinas 1993 pageant, where then 20-year-old Nestor “Derick” Hibaler competed as Mr. Pangasinan. At the pageant, he had a sad tale to tell, as he was then supporting his siblings by cleaning his aunt’s taxicabs. He had to stop school as life was hard then.
The 6’1″ upstart did not win any of the awards, but he got noticed by the D-list fashion designers and talent managers who were ogling at the fleshfest. [That year, a Bulacan province representative, who went by the name of Carmelino “Gandong” Cervantes won the pageant. He was the same guy with the funny hair, over-the-top acting, and who delivered his lines in a sing-song manner in Sibak, a movie about three brothers who strip-danced for money. Incidentally, his first runner-up, Luis Cortez was also in the flick.]

Derick Hibaler readily grabbed the showbiz offers after the pageant. However, he soon noticed that the only exposure he got were photo shoots for the gay magazines at the time. At one time, he was even asked to pose with only neckties [yes, how contempo] covering his privates. He disappeared and left the biz in disgust. He soon re-appeared as a model for minor designers in the city. Soon afterwards the bigger designers took notice and cast him in their shows. He has since done Cosmopolitan Philippines Magazine’s annual Bachelors’ Bash and top-brand modeling assignments. 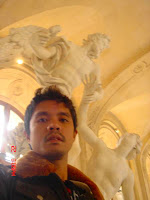 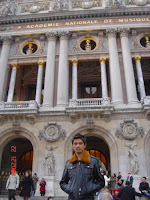 Derick [pics above were taken in Paris], has since moved on. In his resume, he lists his job as “product development consultant, model and stylist.” And now he is a designer. The hard-up Pangasinan boy, who still looks good in his slim jeans, has overcome adversity and grabbed fickle Fortune firmly.