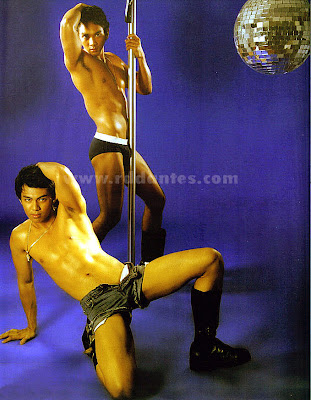 Confirmed: Provoq men Johnron Tanada and Gabriel “Gabz” del Rosario are set to do a movie together with Viva Digital. The guys will topbill the road-trip feature entitled “Kambyo,” together with Kenjie Garcia [Ang Lihim ni Antonio]. Of course, the movie, which will start shooting any time soon, will again be directed by Jay Altarejos from the screenplay of Lex Bonife – the same tandem that magically created the daring flicks Ang Lalake sa Parola and Ang Lihim ni Antonio. It seems like Johnron‘s career is on the upswing these days. He is at present shooting that hush-hush light movie south of Manila with a Latin American actor. Gabz, on the other hand, recently came from the Santiago Bikini Open 2008 in Ilocos Sur, where he lost unfortunately. And as for Harry fans, there’s a movie coming up soon, too!

8 thoughts on “First read on HMP: Johnron and Gabz to do a movie together!”