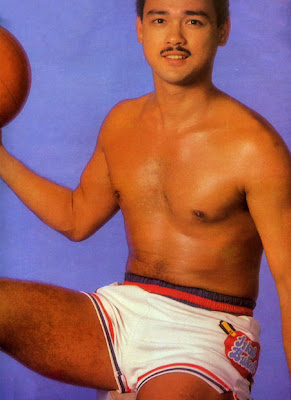 Okay, I’m giving in. Here’s Gino Antonio, that actor in the mid-80s who made a lot of skin flicks, not just the ornery ones but the real deal with all the penetration shots. To those born in the 80s and later, who were too young to understand at the time, Gino Antonio was one of the go-to guys then [together with Mark Joseph, Tony Martinez, Bobby Benitez and Michael Alfers], in the era of the Pene Films, so-called because of the actual showing of the act of intercourse onscreen. Unlike his contemporaries, however, Gino Antonio got cast in mainstream films, albeit with a little showing of skin, in such movies as Private Show, Tayo na sa Dilim, and Rape of Virginia P. Gino Antonio was last seen in the 2002 Visayan soap Kapalaran and in the 2004 Nora Aunor-movie Naglalayag as one of the bit players. He has since aged.