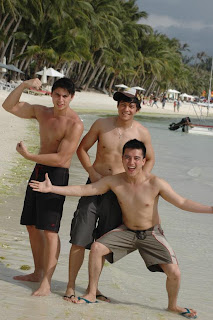 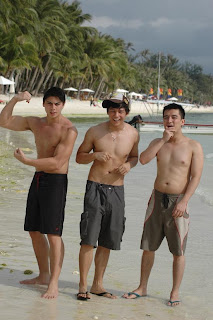 BORACAY – Holy Week in this island had it so full of celebs and models, everyone’s craning their necks for the next popular one to pass by [hopefully, shirtless]. Niko Arellano was his usual perky self, in a group of equally tall and slim but fit guys, save for one who’s older and the one-of-these-guys-is-not-like-the-other kind.

JC Tiuseco also drifted along the beaten path, shirtless and so delish, with another male mod, while John Lopez alternated with Adrian Racho in the stylish Marlboro booth. Speaking of Marlboro, a sunburnt and shirtless Horeb Sibal of CloseUp to Fame, roamed the bars and restos with other models, offering Marlboro packs. As usual, Carl Rosadino was tramping through the paths, this time around with cute and young gay guys from Manila.

Actor Paolo Contis, who is hot in person, was well-behaved at the happening Juice Bar, and so was JC Cuadrado, cutesy in his regulation board shorts and white shirt. Bench hunk Bruce Quebral, with girlfriend in tow, was gamely posing with people, while charming Victor Basa worked the Del Monte Fit ‘N Right Challenge crowd.

Surprisingly, the muscled queen and his consort, together with the models entourage were nowhere in sight during the daytime. At night, they come out and party, like at the by-invite only Philip Morris event at Hey Jude.

And Lance Onate was spotted at the new Boracay Holiday Resort, rooming in with a toned mestizo guy his age.

Photos above are of Chris Nepomuceno and 19-year-old commercial model and GMA Talent Center artist Joseph Marco with an unidentified male friend, having fun at the beach.