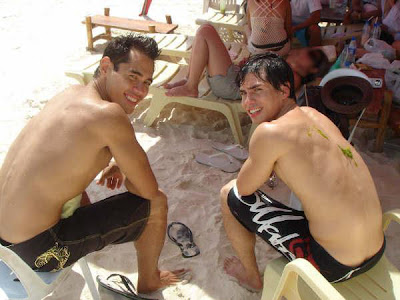 Photo: Models Larry Bril [left] and Vince Canizares
BORACAY. Let’s see: Delish Ram Sagad was early at the Manila airport, waiting for his mates by the entrance, on a noon flight to Boracay. Turns out, he was in the company of Lance Howard, and the muscled aging queen, moneyed and with a repute for surrounding himself with male models from Manila. There’s the aging queen’s constant companion Bill Elizerio and the strapping entourage of G-Ford Lara, James Zablan, Jadel Lee, and a host of others, including girlfriends. They were met at the airport by a shirtless Andrew Wolff. At night on the island, a very-ripped Adrian Racho was working his cute litle ass off at the hip Marlboro booth by the beach. Carl Rosadino, looking bedraggled, roamed the beaten path with two queens – both dumpy and advanced in years. Over at Guilly’s [next to Club Paraw], Andrew Wolff was in a small group that included the reclusive Chris Nepomuceno, who took off his top to reveal angel wings henna-tattooed on his back. At the bar, JC Cuadrado – cute but not buff, not sexy – was talking intently with a pretty girl. Later, shirtless Andrew was seen giving a back rub to an appreciative Chris. And the alcohol started to work its way, I had to go home and sleep.