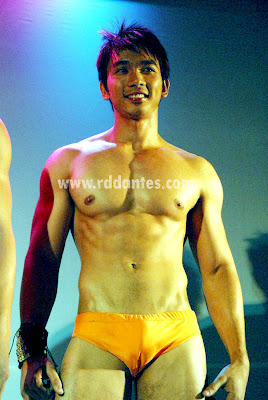 Johnron Tanada gets a bit chatty and makes clear to me that he only plays support in the two gay movies he is doing this month – the one being shot in San Pablo City this week, and the Viva-produced Kambyo in Vigan City next week. Nevertheless, he declares that he’s got meaty roles in both flicks, and I suddenly wonder about the meaty part. Of course, he gets to do frontal nudity scenes in both movies, he says with a straight face. Bahala na, is how he is putting it. What comforts him, he states, is the fact that he’ll be handled by good directors and that he is finally making movies where he gets to show off real acting. When asked about Provoq, Johnron’s face puts on a cute smile, and says they are busy with shows in town fiestas. How about Harry, I ask? Johnron wrinkles an eyebrow with an answer – Why are you always looking for Harry? Mataba na siya ngayon.